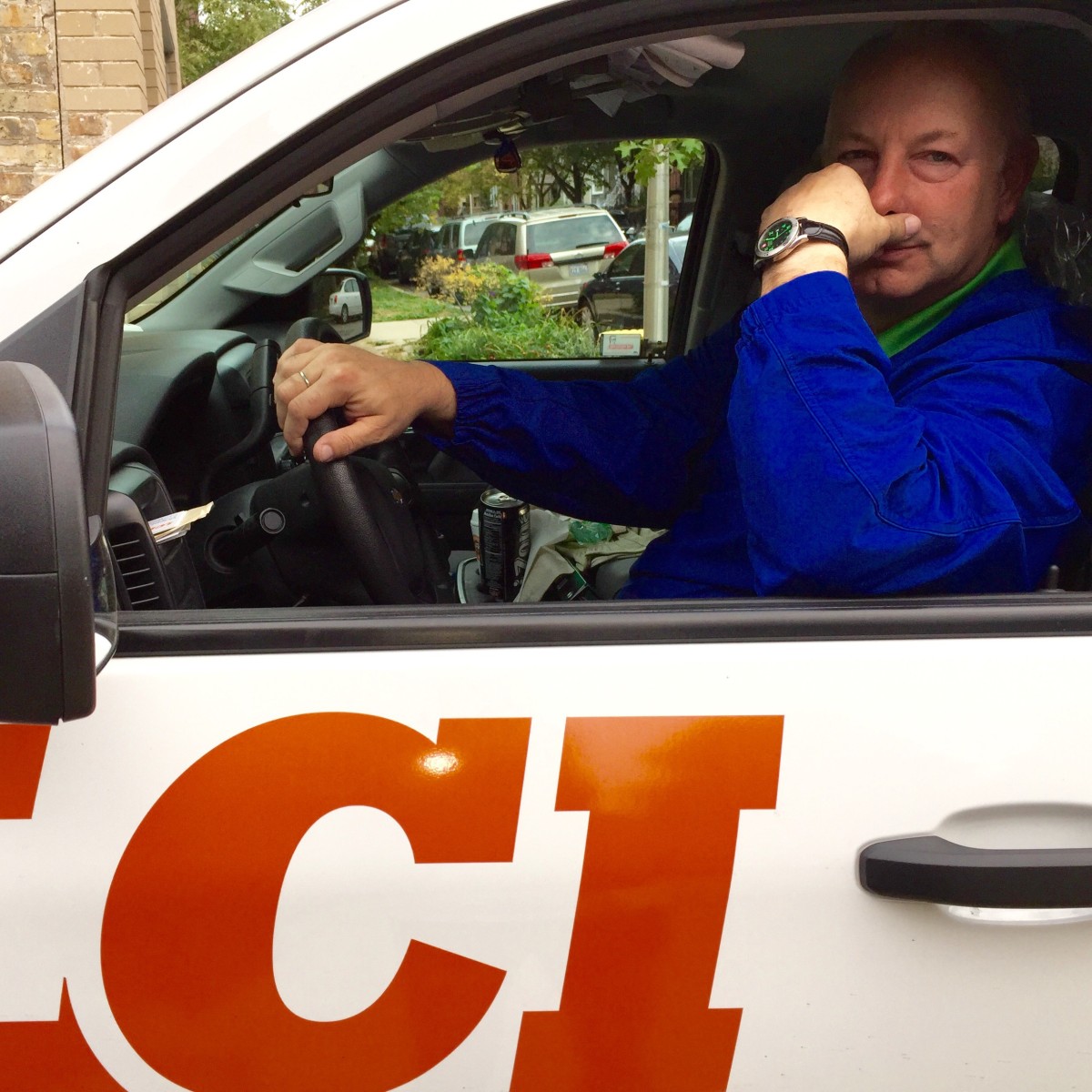 He is a Chicago man with three decades working in the construction industry under his belt. Food has played an integral role in the development of his relationships throughout the years in a variety of work settings both as a carpenter and a general contractor. He has eaten at every hot dog joint, sandwich shop, pizzeria & taqueria you can find in the city.

I’m more of a meat and potatoes kind of guy for my normal meals. We’ve had a whole health craze since the ’80s…what do you call rabbit food? Salads… everyone wanting to eat healthier … That sent us to a lot of those healthier restaurants that I typically wouldn’t go to.

There’s stages in the construction industry, and you start off as an apprentice where you’re at the low end of the totem poll. Even though you’re at the low end you still intermingle with journeymen carpenters, superintendents, owners. You’ll still have some sort of interaction with them and you see what they do on a daily basis, and if it appeals to you you work towards that position. You start off and you’re carrying your lunch. It’s kind of a cycle. You start out you’re a grunt. You’re doing all the manual labor, then you start using your mind a little more. Then you move up—you become a foreman—then you have to tell people what to do. As you step up from there going to a superintendent, to a general contractor position, you have to know what all the trades are doing.

Typically, you get 30 minutes for lunch. Period. Start to finish. And if you’re in a high rise or a building that has an elevator… if everybody leaves to go to lunch you only have five minutes to eat a lunch by the time you get down. So they’ll typically have a truck on site to buy something. Typically they would have burritos, hot dogs, cheese burgers: something that you can eat with one hand while you’re still doing something else. They try to give you a cold drink, a hot sandwich of somethin’ [pause] you know easy for you to carry back and forth.

Most of us that work in the field have a lunch box that was an integrative part of tool box because it was so valuable. I would say that the majority of carpenters would bring their own lunch. Usually no one wants to take that time standing around waiting for the elevator so they would just stop working where they’re at, sit down somewhere comfortably and open up their lunch box…and then they’d get their full 30 minutes from working and still eat a halfway decent lunch. Usually it would be a steak burrito or a chicken burrito. Those would usually be big—you wouldn’t finish it all in your half hour of eating. Depending on the season it would change from hot soups in the wintertime, typically with bread, or summertime would be more your cold cuts lunch meat. Peanut butter and jelly was always a standard for everybody.

Not to stereotype any carpenters or anything like that. You work hard to get to lunch—you’re very hungry. You’ve got a short period of time to eat, and you’re trying to eat as much as you can in a short period of time, which is why you’ll grab for a burrito that has meat, lettuce that kinda stuff to get as much as you can into your stomach. Tamales were a big hit too because the cornmeal keeps you full and they were easy to slide down. The carpentry industry has an array of ethnic people…your average project would last 3-4 months, you’re gonna be with that person everyday for and you guys kinda get to know each other discussing stuff you know.. “have you ever had it?!” They’ll always say, “My such and such is the best you’ve got to try it.” They all have their own food that they eat, and we get to try it.

In the stage as a carpenter and you’re trying to move along, time has become important. You’ve got young kids at home, you’ve got a wife, whether she’s a stay at home mom or you’re paying for a babysitter, the sooner you can get that babysitter out of the house, [the] more economical it would be. What guys have done… they’ve got the power bar stuff. They’re not taking a lunch. They’re not taking a break. They want to work straight 8 hours and get out without extending the day with having lunch or break. So to keep their nourishment up as they go, they would put a power bar in their pouches and they chew on those as their working. They’re not filling a meal but their eating enough for where they can get home and get to the kids as soon as they can. A lot of guys have evolved to say, you know, I don’t wanna stay at work, I don’t want to sit in traffic with everybody else. That’s another type of carpenter—or type of person—that weighs more value on time than they do on eating.

It’s definitely effective because they’re not taking the break…the coffee break and the lunch break…they’re constantly focused on the project at hand- you don’t have downtime. Let’s say lunch is 12:00 to 12:30, well, quarter to 12. They’ve got to go wash their hands and go to the bathroom before they go to lunch—they’ll do that on company time. You lose productive time from stopping and starting. You’re sitting at lunch and then oooooh oh oh you may have started a conversation at 12:27 then 12:30 you walk away from break area and you’re starting conversation, you’re losing productivity. There’s something to be said about working straight 8 hours to get home. You’re focused on the project for a full 8 hours, that way it’s more productive.

We had a garage on the southside of Chicago, and near that garage there was a Mexican restaurant, and I was there one day and their door was not closing. The owner happened to be there in the establishment and I said, “hey I can fix that door for you, no problem.” I said, “yeah I’m with a construction company.” You know I fixed the door within a matter of minutes. I had the door fixed, he was so happy it got done I ate there for probably six months to a point I felt guilty. It didn’t cost me anything but time and I was on my lunch when I was fixing it. It was a great deal.

Part of my job [now] is to entertain clients and therefore it’s a weekly ordeal or a weekly job for me to take someone to lunch so you know for having that as part of my job I would eat out a lot more than most people would.

I leave it up to the client 100% and I’ve eaten food that I’d never eat normally the most with going out with clients. Pretty much most of the Asian food I typically hate but if the client wants I would go there and eat that. Indian food—definitely wouldn’t eat that unless the client really wanted it.

We had gone to a restaurant downtown and it was a steak place, so I was definitely happy with the food that was being served, but then as we were there eating it was kind of a tight quartered restaurant and they sat some people down the table next to us and it just happened to be Michael Jordan, Charles Barkley, Scottie Pippen. My size is I’m 6’2., 2 ½… 180 pounds, so I’m not the smallest guy, and the client I was with a large fella, and then with the basketball players sitting next to us they were tall. We were….infringing on each other’s space because there wasn’t enough room to sit comfortably and as we were there we were looking at each other and we just started talking. We got a relationship going to where we had another lunch after that at a different restaurant. That experience really enhanced my relationship with the client because for a fluke these superstars sat next to us. We were able to…get to know them on a personal basis that kept the relationship with me and the client together and the client was extremely happy and he had autographs for his kids, so it was a really nice experience for both of us.

The industry is extremely competitive and a lot of construction is kinda the same. You’re doing a lot of the same things so what you’re trying to do is relate to a client on a more personal basis. Usually if you take them out of the work environment and into a restaurant they change somewhat and become a work friend. Then you get to know them a little better from a friendship standpoint they feel more entrusted in you, so if they have a problem or have something that needs attention it’s like calling a friend. It kinda works to both of our advantages. The trust is built not so much just from our work performance, which is very important. Two companies if they both perform the same way in the field, the person who has the more personal relationship with the client is going to get more work… I don’t want to say easier, but more appreciated work.

When you just sell work for years and years, you miss working with the tools so then you find time and you say, “I don’t mind doing that, I’ll do that myself, I’ll do the ceiling.” It’s enough to keep you lively and keep your finger on the pulse. You’re not asking someone to do something unrealistic because you just did it. Then you know when a guy’s killing you on a project. Hanging ten sheets of drywall when he should do fifteen/twenty. It all ties in. But all in all I’ve had a great career…I had fun at all stages because I like what I do…I still do.